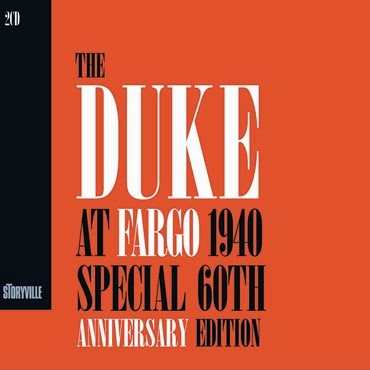 Among other things, this classic album is (especially in its Special 60th Anniversary Edition boxed set) a historical document: the first time a whole show by a major jazz group was recorded live. And it only happened because two young audio geeks in the middle of nowhere owned a portable disc-cutting machine they wanted to try out. The Duke himself gave his permission - though he didn’t really understand why they were bothering, if you can believe that -  and the show was recorded direct to 16-inch discs, at 33 1/3 rpm, using just three microphones. Some songs are missing their beginnings or endings as our intrepid heroes scramble to load new discs onto the machine, but, even allowing for several hi-tech restorations and remasterings, the recording quality is astonishingly good.

Then again, it helps if you’re recording one of the greatest bands of all time, whose peerless playing, brilliant arrangements, and internal dynamics should have made it hard for anyone to make them sound bad. This is the famous ‘Blanton-Webster Band’, named after two of its biggest stars, tenor sax legend Ben Webster and Jimmy Blanton, who can be heard here revolutionising the art of bass playing, and who, a year and a half later, would die of tuberculosis at the age of just 23. The Fargo show was also the debut of another distinguished Ellingtonian, Ray Nance, just hired to replace the irreplaceable Cootie Williams (one of Ellington’s many strokes of genius was that every time he lost someone irreplaceable, he replaced them with someone just as interesting but in a completely different way).